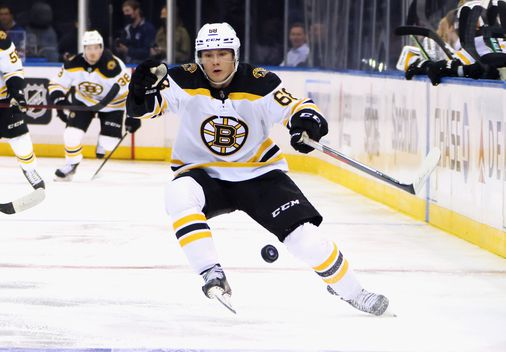 “I’m going into this open-minded,” the Bruins trainer stated Wednesday, his first day presiding over coaching camp. “The players don’t know me and I really don’t know them. I want to see what players can do.”

For essentially the most phase, he plans to pair more youthful avid gamers with veterans over the six-game, 21-day lead-up to the Oct. 12 season opener in Washington.

“We’re going to be looking for guys that are effort and execution,” Montgomery stated. “Effort for me is first on pucks. We want to play a possession game, so you’ve got to be first on puck. You can’t be second.

“Then you’re always looking for guys who can make plays. That’s offensively, those really shine, but defensively, who’s killing plays? Who’s making life hard on other people? Those are the areas we’ll be looking for and discussing.”

The Globe’s most up-to-date sports activities headlines delivered in your inbox each and every morning.

As is standard for a preseason opener, Montgomery expects {that a} more youthful crew, together with Fabian Lysell and John Beecher, will go well with up Saturday in Philadelphia (7 p.m., NESN).

“In the European rinks, he has more opportunity to stay wide, but you saw him attack inside the dots, from the corners to attack the net.”

Lysell’s puck management and situational knowledge can improve. But the Bruins believe he’s a dynamic offensive player in the making.

“I just like his attack mentality with speed and skill,” Sweeney said. “He wasn’t shy about shooting the puck when it was on his stick, or making a play. The guys he’ll spend time with will appreciate.”

Sweeney said Beecher’s performance at the rookie tournament — three goals in three games — didn’t change the team’s perception of him. They’ve been encouraged by the development of the second-year pro, who didn’t pop offensively on a stacked University of Michigan squad.

“The rhetoric’s been a little unfair on Johnny,” Sweeney stated. “He spent three years in college. Some guys have been at the pro level. He’s just starting to get acclimated at the pro level.

“We see him in the middle of the ice. He’s really good on faceoffs. We see him go wide and take pucks to the net; could he be a power forward winger of some sort in the league that has those physical attributes? Yeah, he probably can. Now, can he score when he’s in the [tough] areas?”

All to be made up our minds.

Another day, another Sweeney chat with reporters, and nothing new on Pastrnak’s pending contract extension.

“I don’t think there’s a concern,” the GM said when asked if the situation could become distracting to the star winger if prolonged. “David would be the only one to speak to that. In a perfect world, as we referenced, we’ll try to be aggressive. To have him signed as a lifelong Bruin has always been our goal.”

“You just try and grind it out,” he stated.

The veteran Bruins were off the ice Wednesday. Marchand, Charlie McAvoy, Matt Grzelcyk, and Hampus Lindholm were the only ones spotted skating. The injured Marchand (double hip surgery) and McAvoy (shoulder surgery) performed drills under the eye of skating and skills consultant John McLean. Grzelcyk (shoulder surgery) went afterward for a solo skate with McLean. He looked sharp … Forward Matt Filipe, the third-year pro out of Malden Catholic and Northeastern, won’t start camp on time because of a lower-body injury. He put up 17 points in Providence last year.

The initial camp roster of 61 players (34 forwards, 21 defensemen, 6 goalies) did not include anyone on a professional tryout agreement. Sweeney said they offered “a couple” PTOs, and one is “pending.” He would not say which veteran is mulling his options … Sweeney on Zdeno Chara’s future: “We’ve had discussions about where he may want to jump in from a hockey [operations] standpoint. I think he was pretty clear yesterday where his priorities are, but it wouldn’t surprise me [if] he gets an itch to impact the Bruins at some level — just on his own timeline, that’s all.”