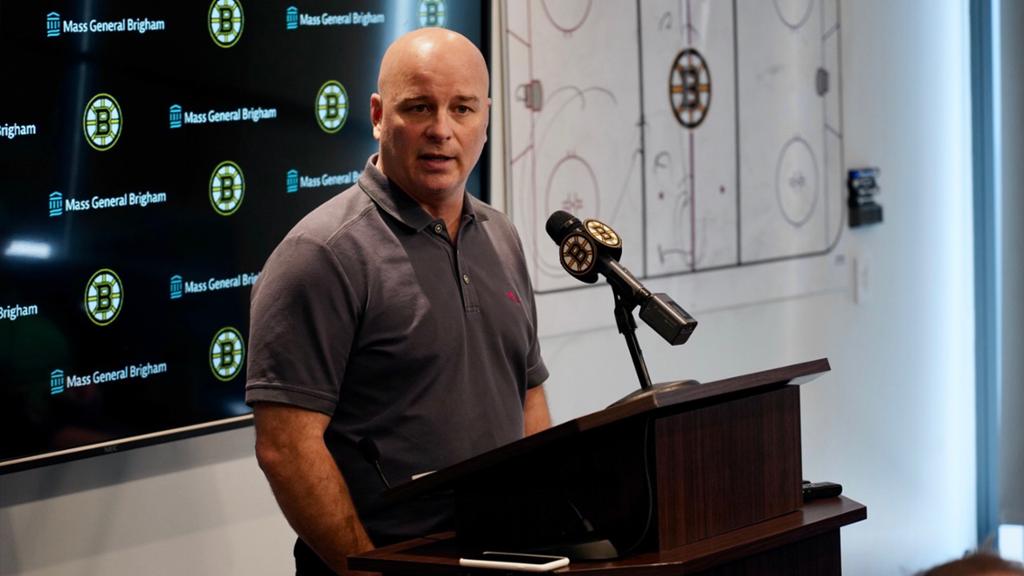 BOSTON – Jim Montgomery listened closely as he sat within the entrance row of Zdeno Chara’s retirement press convention on Tuesday morning. As the longtime Bruins captain spoke intensive in regards to the tradition that he and his teammates attempted to domesticate throughout his 14 years in Black & Gold, Boston’s new bench boss used to be ensuring to retailer away each and every phrase.

So, when time got here to deal with his new membership on Wednesday morning as coaching camp opened with off-ice checking out in Brighton, Montgomery had Chara’s phrases in thoughts.

“Like Zdeno talked about [on Tuesday] – the culture here, how to work, the accountability, the compete that we’re looking for from everyone,” Montgomery stated of his expectancies of for camp. “I think if you get the opportunity to be on the same line as a Charlie Coyle or you get to be on a D pairing with Brandon Carlo…you get an opportunity with those types of guys that have been with the Bruins for a while, this is the way we go about our business, this is the way we compete, this is the way we do things. We do it right.”

During his couple of minutes across the facility, Montgomery has seen the numerous usual to which the avid gamers hang each and every different, in addition to the expectancies that exist inside the partitions of Warrior Ice Arena. As such, the vibes across the rink have helped ease his transition and create a well-known feeling that he likened to his days as a participant on the University of Maine and his training stint on the University of Denver.

“Excited. Surprisingly really comfortable just because of the culture that exists here,” Montgomery stated of ways he is feeling as camp commences. “The fiber of work, compete, and accountability that is echoed from the top – from Cam [Neely] to [Don Sweeney] to [Patrice Bergeron] to [Brad Marchand] – it’s true of every player I’ve met, it’s special to be here. That makes you really comfortable. And that’s your own beliefs as well.”

Video: Montgomery addresses the media on Day One of Camp

While talking with his avid gamers and staff workforce on Wednesday morning, Montgomery established his foundations for good fortune, which integrated “effort and execution” as a very powerful pillars, values that fall proper in keeping with the ones which were in position in Boston for a while.

“The message was about the opportunity – and that was echoed by Cam and Sweens as well, about the opportunity on the back end with two guys injured and with Marchy out, the opportunities there, which everybody looks for in camp,” stated Montgomery. “Then I talked specifically about being prepared and being on time. We have a lot of people here to help. Ask questions. We’re in it together.”

Sweeney, as soon as once more, supplied an replace in regards to the negotiations with David Pastrnak on a freelance extension, whilst reiterating the group’s intentions to fasten up the winger for future years.

“I don’t think there’s a concern. David would be the only one, ideally, to speak to that,” stated Sweeney. “In a perfect world as we referenced, to try and be aggressive, to have him sign long-term and be a lifelong Bruin has always been our goal. I think David shed a little light in terms of where he was at personally and we respected that.

“I’ve had conversations, I’m going to proceed to have conversations. Ideally, I’d love to get it executed on the earliest level conceivable. Hopefully he feels the very same approach in his camp…out of doors of that, I’m now not gonna touch upon anything else out of doors of that. Ultimately, that is what we would cherish to do.”

Video: Sweeney meets with the media on Day One of Camp