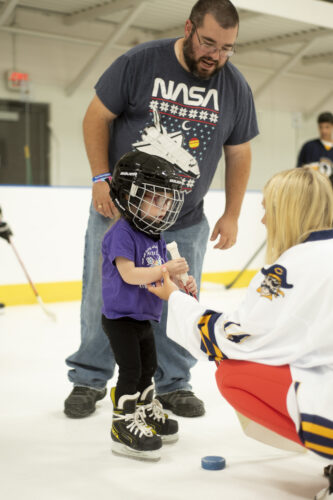 The committee’s purpose is to succeed in kids and households that would possibly not have regarded as signing their kids up for hockey, whether or not it’s that they didn’t play hockey themselves or they’re unfamiliar with the sources to be had, akin to scholarships and get entry to to reasonably priced apparatus.

The tournament allowed early life of every age to check out on hockey apparatus, skate at the artificial ice with the assistance of the Crookston hockey groups, take a look at their hand at a capturing station, and play Plinko for a possibility to win hockey equipment.  They additionally gained a loose stick that was once taped and lower to dimension. The concession stand was once open with loose snacks and Crookston hockey attire was once on the market.  Representatives from Parks and Recreation, in addition to the Blue Line Club, had been readily available to reply to any questions in addition to lend a hand folks in signing their kids up for hockey and becoming them for equipment for the impending season.

There had been about 150 other people, together with roughly 30 volunteers, in attendance of every age because it’s by no means too overdue to check out one thing new!

Thank you to all who attended and we are hoping to peer you on the October sixteenth tournament to check out out the rink when the ice is in!  The tournament is open to all Crookston early life and surrounding spaces.

If you will have any questions on signing up your kid for the impending hockey season, please touch Kristy Swanson at crookstonhockey@gmail.com or 218.470.0423 or Crookston Parks & Rec at 218.281.1242.

The Blue Line Club want to additionally thank the world sponsors for all in their donations and sources to assist in making this tournament such a success.

Sponsors for the development integrated the next:

All different apparatus, provides, and sources had been backed via The Blue Line Club.